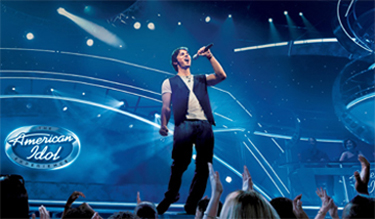 Disney’s third park is also a working studio and the theme is very clearly and definitely The Movies & TV. It is also noticeably the funkiest Disney park, although there are three shows based on cartoons and Mickey Mouse is still the star of the show.

The Tower of Terror takes you through an old crumbling, mysterious hotel, with spooky music and eerie unsettling visual effects, before plunging you down a 13-storey lift-shaft….this is claimed to be “a different ride every time”, since the details change – but you will feel “weightless” every time as you plunge. The hotel lobby itself is a beautifully dressed on a 1930s theme. 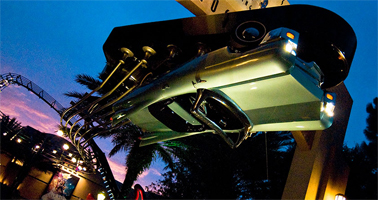 The other outright thrill ride is the Rock ‘n’ Roller Coaster, a similar indoor dark coaster to Space Mountain, although accompanied by thundering Aerosmith rock music and featuring the added element of a 70mph launch.

A bit less motion-frantic is Star Tours, an extremely well done Star Wars simulation of a tourist trip in space that goes very badly wrong. The ride now includes details from the second trilogy of movies.

Fantasmic is a light-and-water spectacular held once or twice a day, according to season, in an 8000 capacity arena. Calling it a laser and firework show with fountains doesn’t begin to describe the impact of the outstanding effects, including projections of movies onto parallel curtains of water.

Beauty and the Beast is a live theatre performance of the movie, featuring several of the songs, all the main characters and a grand set-piece finale. Voyage of the Little Mermaid is a stage version of the movie, featuring songs with live performers and puppets, and uses lasers, light effects and curtains of water to create an “underwater” show, including a storm. The other live show is the American Idol Experience, a spectacular lights 'n' sound recreation of the show with audience performers.

Serious movie buffs will love the Great Movie Ride, a thoroughly enjoyable journey through many famous movies (including Alien, Casabanca and Mary Poppins), recreating scenes with animatronic figures, some live action, a bit of a “plot” and a helping of movie magic. The Backlot Tour lets you see props, sets and locations from real movies as you are taken around the studios on a tram. There are also a couple of stunts and a few surprises in Catastrophe Canyon and you’ll see how to stage a sea-battle with torpedoes and depth-charges. Plus a display of models and characters from famous movies.

Lights! Motors! Action! is an import from Disneyland Paris and is a live action show featuring some extraordinary driving stunts over ramps, into flames and through buildings, on the basis that it’s a film shoot for an action movie. The setting is a French market town and you watch from stadium seating – it’s a startling show and highly recommended.

The Indiana Jones Stunt Spectacular delivers on the name, recreating three powerful scenes from the first film on a large set, with giant boulder, gun fights, crashing trucks and exploding planes.  Very spectacular and who can resist that music? 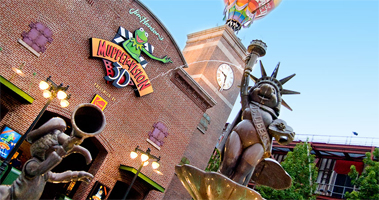 Muppet Vision hasn’t got out-and-out thrills but does have a few surprises and very striking 3D effects. It’s staged in a theatre just like the Muppet theatre on TV with “live” puppets as well as the movie and is funny as well as entertaining.

Toy Story Mania is a 3D whirling shooting arcade of several different funfair games involving the characters from the Toy Story movies - witty and inventive, there are often long lines for this ride.

Want to see what Disney's Hollywood Studios are like? Then RIDE THE PARKS!