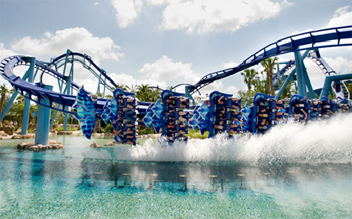 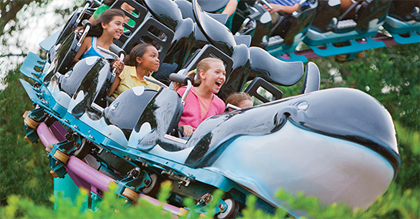 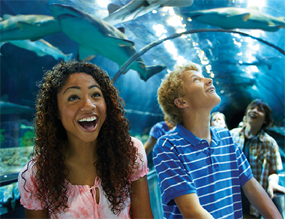 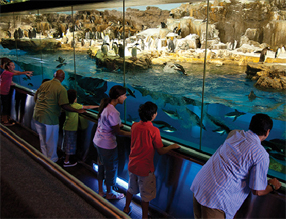 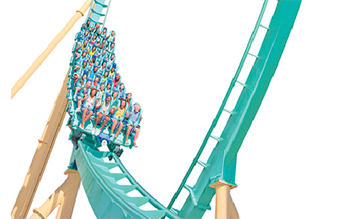 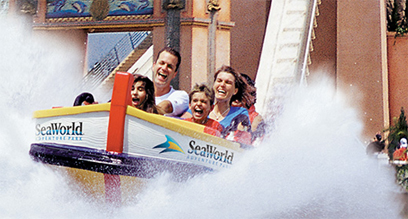 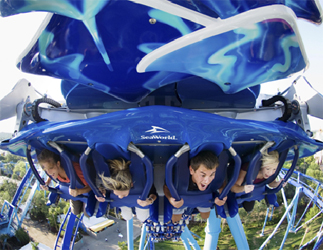 Seaworld is different to the other main theme parks in that it is based around sea animals, rather than film, TV and thrills. However, while it has the spectating/educational functions of any zoo, there are many shows, presentations, displays and other spectacles. They have also, in recent years, developed a number of ride-based attractions, with a couple of the coasters being very highly regarded.

The signature attraction of Seaworld remains the Shamu show, when the renowned killer whale (and chums) performs genuinely awesome feats in a huge glass-sided tank in a 5000-seat stadium, with a giant video screen giving you extreme close-ups. The first 13 rows are designated the splash zone and kids will have the chance to get totally drenched during one of Shamu’s stunts. The elements of the show change regularly and it is often possible to see two different shows in a day. 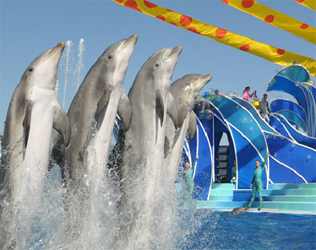 Blue Horizons is in the same vein, but with dolphins and smaller whales performing their own equally dramatic and remarkable feats. You may find that the calypso music stays with you a long time after the show.

Clyde & Seamore is a sealion and otter show on a pirate theme and it is played for laughs, with a lot of slapstick comedy as well as tricks from the participants. Pets Ahoy is another comedy show featuring land animals, that we have no feedback on. Most of the shows also have an educational segment/aspect.

The non-performing wildlife features include a simulation ride in Wild Arctic, where you are in a helicopter “downed” in a blizzard and land at a polar research station where you get superb close views of beluga whales, polar bears and other creatures through glass, in very atmospheric dim light. 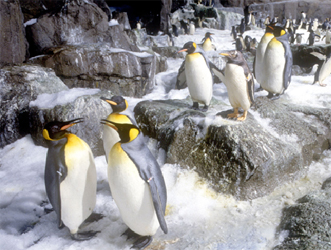 Even more dramatic is Shark Encounter which features a long glass tunnel / walkway through the bottom of a giant shark tank. It’s a very close shave indeed with these fierce predators (plus barracuda and conger eels) and, as you slowly move through the tunnel, you feel that they’re all around you – because they are all around you.

Other creature-features include dolphins, rays, manatees, sealions and everybody's favourite, the penguins. Many of these are in superb settings (the penguins, for instance, are in a landscape with real ice made by machines in the ceiling) and there is also a tropical rain forest. 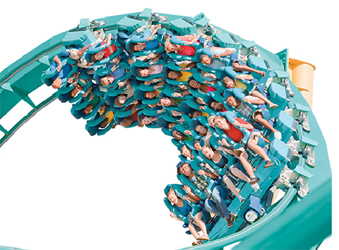 Recent years have seen the addition of thrill rides. Kraken is a very spectacular coaster where your legs dangle as you’re hurled around. It scores quite highly for thrills (15 storeys high and the fastest speed in town) but not for theming. More elaborate is Journey to Atlantis - a water ride, offering perhaps a unique combination of coaster and flume, with some special effects too. The most recent addition in Manta, a swooping and diving coaster that seems to fly and then threatens to take you under water....

Want to see more of Seaworld? Then RIDE THE PARKS!