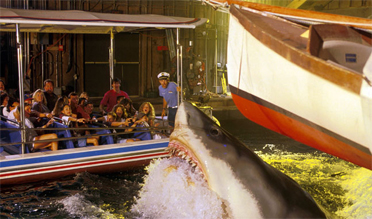 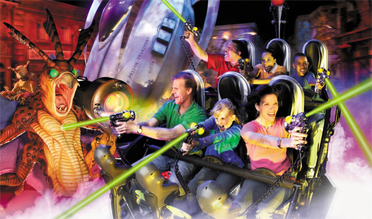 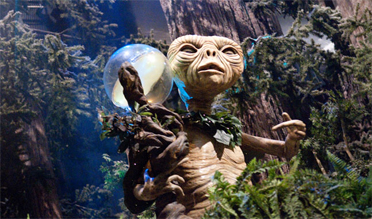 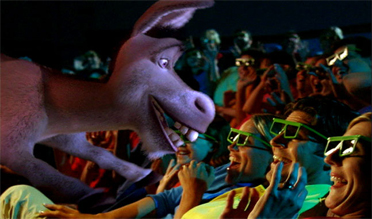 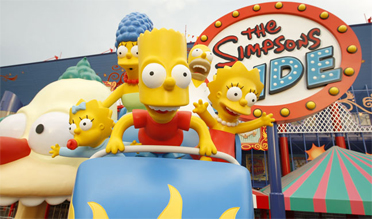 (On this page, click on the photos to go directly to the Universal website for the ride)

Opened in 1991, Universal at the time set new standards with the quality of its rides and its use of technology - its former flagship Back to the Future ride was replaced in 2008 by one based on The Simpsons. After an elaborate set-up, you climb into a “car” and set·off on a breakneck journey through a giant amusement park to stop Sideshow Bob killing the Simpsons. The vehicle seems to turn, twist and plunge on its journey “into” a giant Imax screen. This has quickly become  the park’s stand-out ride, with sensational huge visuals and smooth dramatic motion. Being Simpsons-based, it’s also funny and repeated rides do reveal subtle things that you might miss on the first trip.

Next door in the sci-fi zone (USO is set around a lagoon and is loosely divided into film-based sections) is Men In Black. You spin and twirl in a high-tech waltzer through a sort of video game where you can blast aliens for high scores. Very bright and entertaining for sure, with a few unexpected twists. 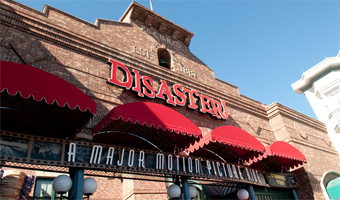 One of the first spectacular theme park rides ever was Earthquake (renamed Disaster!) and it still packs a punch. The lengthy pre-show segments about special effects have been sharpened up recently, and the ride itself simulates a journey on a San Francisco subway during an earthquake with the roof splitting open, explosions and floods – 65,000 gallons of water.

In the watery section, there used to be a giant shark hanging from a gibbet and the Jaws ride, but these were closed in 2012 in a major re-modelling of the area to feature a second Harry Potter ride and the "London" section of the JK Rowling books (few details available at the time of writing).

ET Adventure – a gentle ride back to ET’s home planet on a bike. Nothing spectacular but nice – a terrific waiting area (a dark realistic forest at night) and it’s great when you realise why they asked you your name on the way in.

Twister (based on the film of the same name) features a small town/farm set with a demonstration of various movie tornado effects. Fairly dull. 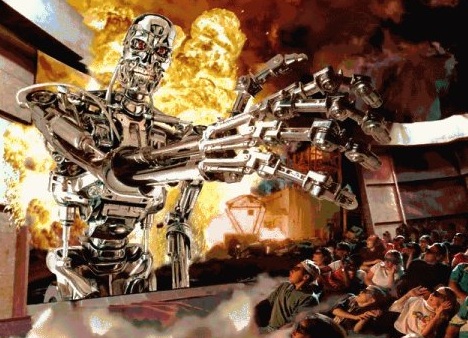 Terminator 2: 3D  follows the movies into a paranoid future and the fantastic mix of live action, giant-screen 3D movie, smoke, video, explosions and gunfire will leave you buzzing until long after you’re back outside. The movie segments were directed by James Cameron himself and the whole experience is very faithful to the style and atmosphere of the movies. Another sci-fi ride scheduled to open in 2013 is an all-new Transformers attraction -

Music plays a big part at Universal and the Beetlejuice Revue is a popular rock ‘n’ roll show in its own small venue; The Blues Brothers sing and play in the streets of “” (driving there in their stolen Chicago police car), and other groups like break-dancers and doo-wop singers can be found around the streets.

Shrek 4D - If you enjoyed the Shrek movies (or at least the better ones), you’ll love this. It’s a 3D screen adventure plus physical effects – wind, rain, etc – in the same style and with the same quality as the movie, using all the original actors’ voices. Both the film and the pre-show maintain the quality of performance and imagination of the original.

Revenge of The Mummy is an excellent imaginative dark coaster experience, with fire, animatronics, movie projections, and excellent theming. The queue area is also highly entertaining, with weirdly unsettling staff in Eygptian costume. We still think Spiderman at Islands of Adventure is an all-round better experience, but ROTM is a do-not-miss. 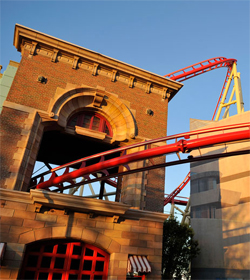 Hollywood Rip Ride Rock-It is a coaster that takes you on a vertical lift before turning and twisting through several of the buildings nearby, all the time blasting out your own choice of musical soundtrack - hence the name Rock-It...

There is also plenty kid-aimed activity : a live Barney show, Fievel and Curious George playgrounds and a Woody Woodpecker coaster, designed for kids but enjoyed by adults.

Want to see more of Universal Studios? - Then RIDE THE PARKS!